HOSEI University, established in 1880 as the Tokyo School of Law, is a Japanese university with a long and storied history. The university accepted 1515 international students in 2019, as a part of...
[«Hosei University» 继续查看]

Throughout the history of approximately seventy-years, Okayama University has managed to develop to a grand scale, with 10 Faculties, 8 Graduate schools, 3 Authorized Research Institutes, a Univers...
[«Okayama University» 继续查看]

It is a global campus where about 500 international students from all over the world study. It was founded in 1639 as a dormitory of Nishi Honganji Temple. Today, the university has campuses in Kyo...
[«Ryukoku University» 继续查看]

In today’s increasingly global society, people are expected to contribute widely to Japan and the world, and to act as leaders for the next generation. Waseda University has produced many great th...
[«Waseda University» 继续查看]

Founded by the Jesuits in 1913 and placed in the heart of Tokyo, Sophia University has been a pioneer in global education in Japan. Being one of the top private universities in Japan, Sophia offers...
[«Sophia University» 继续查看]

The University of Nagano 学系一览 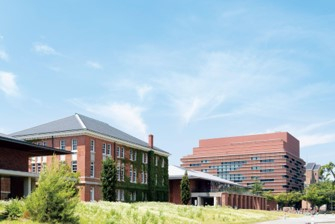 With the teaching of Christianity at the basis, we strive to provide attentive education in small-group classes, to refine each students&...

At Seinan Gakuin Univerisy, we are proud of our long history and tradition as a liberal arts and social sciences university, and our faculty members who excel in education and research, and provide...
[«Seinan Gakuin University» 继续查看]

At Rikkyo, a university of liberal arts with a history of over 145 years, we believe that “new” global leaders with the ability to respond to global issues and social demands, and to discover and s...
[«Rikkyo University» 继续查看]

Tsuda University is a private institution of higher education for women with a history of more than 120 years since its founding. Tsuda's two colleges and the Graduate School are now located o...
[«Tsuda University» 继续查看]

Meiji University was founded in January 1881 as the Meiji Law School by a group of young lawyers barely in their 30's: Tatsuo Kishimoto, Kozo Miyagi, and Misao Yashiro. Currently there are 10...
[«Meiji University» 继续查看]