Sophia University is located in Yotsuya, literally in the heart of Tokyo. Only a few minutes from JR station, the Campus is easily accessible from Tokyo station (9 min), Shinjuku station (5 min), etc. and as such it is very convenient not only for commuting but also for exploring Tokyo. The area around the Yotsuya campus has long been at the center of the Japanese political, economic and cultural worlds. The Imperial Palace, the Parliament, the Geihinkan (State Guesthouse) that hosts guests from all over the world, the National Diet Library as well as an array of offices of multinational enterprises are all within easy walking distance from the university. It is a place where you can feel the dynamism of the global city Tokyo.

This red-brick building, constructed in 1932, is the oldest of the current university buildings and was formerly the center for campus administration. It survived the Bombing of Tokyo of 1945 (during the World War 2), thus becoming a historical symbol of Sophia. There is also a small theater hall inside, which is used for performances given by students.

17 stories above ground and 3 below. Built in 2005. The center of research and education.

The library was built with the aim to gather university’s research resources in one place, and houses many centers and research institutes, as well as graduate program offices.
More than 1.1 million books (about half are in foreign languages), 11,000 magazines and 80 newspapers gathered from the world in 9 languages from 20 countries and regions are stored here.
The library has adopted an open stack system so that users can have direct access to the materials. It also accommodates various research institutes on the 4th to 8th floors so that it functions as a center of research activities.

This 17 - floor building was completed in 2017 and is the tallest building on the Yotsuya campus and as such represents the new landmark of Sophia, often called Sophia Tower. It includes the Center for Language Education and Research, a new 800-seating hall (6-101) and large size classrooms where eminent persons such as UN Secretary-General, Antonio Guterres held a special lecture. At the entrance hall of the ground floor, there is an exhibition space that displays the history and culture of Sophia and its neighborhood. Language Learning Commons (LLC) on the 1st floor of this building offers several activities related to language learning throughout the whole semester. For example, LLC offer weekly language tutorials for 8 languages (English, Japanese, German, French, Spanish, Italian, Korean, Chinese), and lunch time events in which students with different cultural backgrounds can interact with each other. 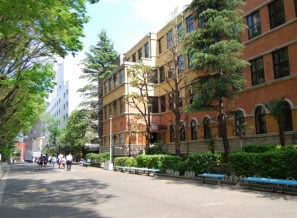 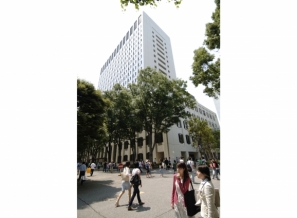 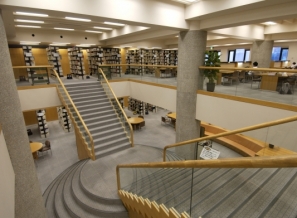